The origins of social documentary photography in Ireland: Part 2.

This photo was taken a couple of years ago. I was travelling between Rossaveel and Maam Cross, on my way to Leenane. The road travels through an upland wilderness of bogs and small lakes, a landscape that is typical of Southern Connemara. It reminded me of a shot taken by Marguierite Mespoulet in 1913, probably to the west on the coast road to the village of Carraroe. 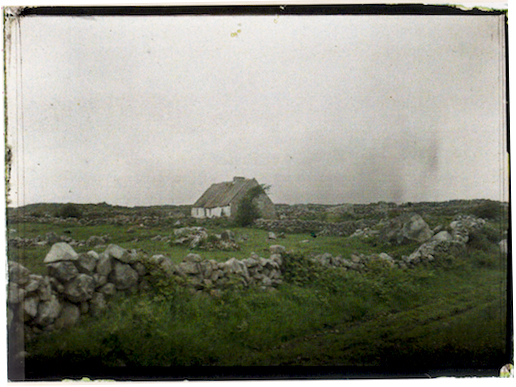 Mespoulet had been commissioned by Albert Kahn to document ‘peasant’ life in the remote west of Ireland. She was using the newly developed autochrome process to shoot what are probably the first colour photographs taken in the west of Ireland. Mespoulet left Galway and headed for Connemara on 31 May, travelling along a well established tourist route. She never got there. She was stopped in her tracks by reports of an outbreak of typhoid that was sweeping the islands of southern Connemara. She took this shot of a thatched cottage. “A little to the north  of the place where this small house was taken” she wrote “the people are dying like flies from typhoid fever.”

“[Typhoid] has made its appearance upon a few islands off Southern Connemara , miles removed from the tourist routes, in Gorumna, Lettermore , and Lettermullen, which have been described as ‘plague spots,’ the peasants are huddled in hovels that pass for houses, and they draw water from stagnant pools.”

The correspondent for the Irish Times claimed that poor housing and lack of clean water were to blame for renewed outbreaks of fever, but argued that talk of an “epidemic’ was not justified by the figures. In a dispensary area of almost 10,000 persons there were five fatal fever cases and 40 more cases notified. He (presumably) drew comparisons with other parts of Connemara  “where things are more favourable, or at least not quite so unpleasant,”  highlighting the fact that in the “plague centre” people shared their hovels with pigs “who were practically members of  the household.”  The peasants, it appears, were the agents of their own misfortune. 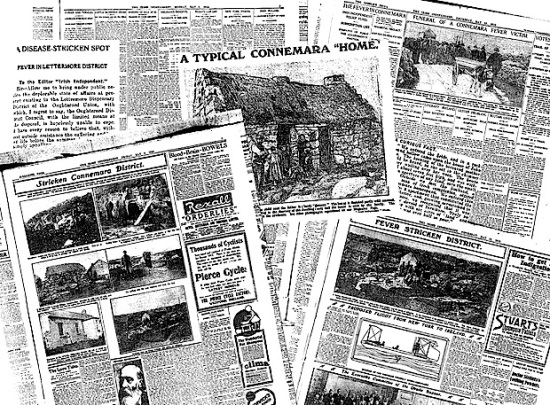 The Irish Independent took issue with this. A correspondent had stated in an earlier article (May 15)  that “If corroboration of the case [that there was a fever plague in Connemara] and the graphic photographs reproduced in our  columns were required, it would be found abundantly in the immediate response to, and commendation of our appeal by those who know the distress and the appalling  conditions of the stricken locality.” The Irish Independent criticised the callous bureaucracy of government and sanitary authorities, accusing them of placing the islanders in imminent danger of absolute extermination through shameful neglect.

The Irish Independent  also published an eyewitness account of conditions in Connemara. It was written by a special correspondent of the Connacht “Tribune.” He had motored with the local M.P. (Wm. O’Malley) to Carraroe, where he met the parish priest (Healy). They went on  Bealdangan and picked up the local doctor (O’Kelly). They then went to the “little hut” of John Lee where they met the Chief Secretary (Birrell), who was on a tour of inspection.

A halftone reproduction of John Lee’s “hut” was featured on The Irish Independent  Magazine Page on May 14, 1913. It was printed under the headline “Peasants Appalling Plight, Fever Stricken Connemara.”

Lee’s family was one of 800 hundred families trying to subsist on patches of potato scattered across  “the wilderness of rock and bog.” His 17 year old son had died in April and another child was in the fever hospital in Oughterard:

“The house stood about seven feet high, and was without an aperture of any kind, save the small door …We entered this 11 feet by 8 apartment that constituted the entire interior, and growing accustomed to the darkness, we recognised that it was practically devoid of furniture … It was, declared Mr. Birrell, the worst dwelling he had ever seen.

Where had he been? People like John Lee and his family had been dying in a famine that had started during the “crisis of 1879” and had continued more or less for over 30 years. On December 13, 1879 The Illustrated London News published the following illustration of the “Bog-Trotters of Ballintober:”

The accompanying article stated that:

The agricultural  disadvantages of Connaught are not to be denied, and we hear without surprise of the distressed condition of small farmers in that part of the island … Here [Ballintober] are still to be found some of the genuine “bog-trotters,” a class of peasants living in squalid poverty by the scanty produce of small plots of ground and wages by field labour, where no farmer has capital to give them employment. Our artist’s sketch of one of their wretched cabins, with the poor man and his children waiting for their dinner of potatoes to be boiled over a turf fire, outside the dwelling, by the comfortless care of the wife and mother, is a sorry picture of Irish rural life. There are probably a hundred thousand people in Ireland whose condition is not much better.

Some 20 years later the same conditions were documented in Connemara, and again in 1913. The tone of The Illustrated London News commentary is not all that different from the Irish Times editorial of 1913. Complacency  and official inaction was the order of the day. In an effort to shock people out of their complacency photographs were taken inside the “hovels” of the starving peasants in Gorumna in 1898. The intention was to prove that reports of a famine in Connemara were not exaggerated, that people were indeed starving to death in the west and southwest of Ireland. These photographs were published by the Mansion House Committee established by Lord Mayor Tallon. It was a remarkable event that signalled that social documentary photography had arrived in Ireland.

Next: In search of the “The Starving West.”

Ballintober / Cluain Bhríde in Roscommon is on the R367, a minor road heading northeast from the N60 Roscommon to Castlerea road, just before the village of Ballymoe. The river Suck meanders through extensive boglands on the Galway / Roscommon Border. The railway line runs through bogland in Cleaboy, just under two kilometres southwest of Ballintober, crossing the R367 at 53.7031629,-8.4184402