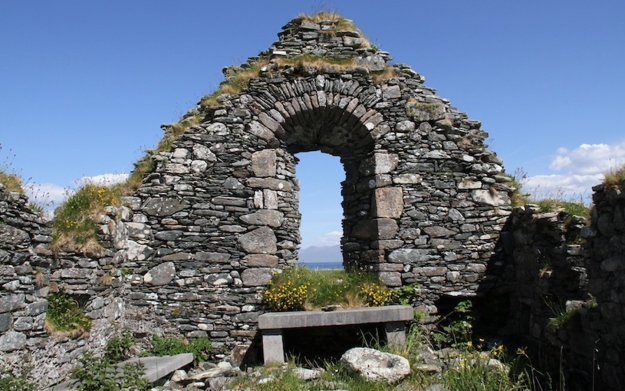 St. Colman’s Abbey is a small ruin on a remote island off the West coast of Ireland. It is situated on the site of a seventh century monastery established by Colman of Lisdisfarne around 668AD. Archaeologically speaking this is a modest site  but it is the  setting for a remarkable sequence of events that were to have profound consequences for the development of anthropology in Ireland and the United Kingdom.

On Wednesday 16 July  1890 – 125 years ago to the day – the steamer  Fingal anchored in Inishbofin. The Fingal had been chartered by the Royal Dublin Society (RDS)  for survey work on the fisheries of the western seaboard. One of the scientists on board was Alfred Cort Haddon, a marine zoologist who had developed an interest in ethnology—the comparative study of races—whilst on a similar survey the year before in the Torres Strait,located between Australia and Papua New Guinea.

Haddon had  joined the remarkable and Reverend William Spottiswood Green, Inspector of Fisheries, in Killybegs in County Donegal  on 26 June and headed south three days later. Haddon  assumed responsibility for keeping a “narrative ” journal of the survey. Green’s narrative has been publish by the RDS  but Haddon’s account has never been published in full and the manuscript is held in Cambridge University.

This is Haddon’s  account of  what happened on Inishbofin in July 1890:

Wednesday – July 16 . Dixon and I got up at 6 o’clock & photographed Cromwell’s Fort and had a bathe. The 2  Mrs Allies (who reside on the island) & Father McHugh came to breakfast at 8 o’clock & after breakfast we tried a new fishing ground for longline fishing. We had just over 400 hooks out on a line measuring about —- feet – the result was poor for we only got 1 Halibut / 5 foot long and weighing 95lbs.) 1 Turbot, 1 Cod, 13 Ling, 17 Conger, 2 Torsk, 1 Cuckoo-Gurnard, 6 Pickard dog fish, 1 Tope, 7 Nurse-Hounds (Dogfish), 1 Skate, 1 Ray. – Then Dixon and I had to measure, weigh & examine a selection of them. I will explain our particular work on another occasion.

The 2 Mr Allies are Englishmen – some time ago, 8 or 9 years I believe, their father foreclosed on a mortgage on this island & so it & several others some 7 in all – including rocks – became his property & he sent a son to look after it & he has lived here ever since. For about the last 18 mths. another brother joined this one & so these 2 middle aged men are living bachelor’s lives on this out of the way island – fishing, farming, & so forth. They have both spent several years in Australia, mainly in Queensland, sheep farming etc.

The latter brother is more or less () an engineer. The former is the recognised landlord. I got more intimate with Edward, the engineer, & I hope I have interested him in Folklore & he has promised to collect information for the Royl. Irish Academy. He told me of an old ruined church where there were some skulls & we arranged with Dixon a plan of action. We all went ashore together that night & he provided us with a sack & later in the dark, took us close to the church. The coast being clear Dixon & I climbed over the gate & went down the enclosure which is practically a large graveyard, on our way we disturbed several cattle. We stumbled along & entered the church tumbling over the stones which are placed over the graves, in the corner we saw in the dim light the skulls in a recess in the wall. There must have been 40 or more, all broken, most useless but on (overhanding) them we found a dozen which were worth carrying away & only one however had the face bones. Whilst we were thus engaged we heard 2 men slowly walking & talking in the road & like Brer Fox – we ‘lay low’ & like the Tar Baby “kept on saying nothing.” When the coast was clear we put our  spoils in the sack & cautiously made our way back to the road, then it did not matter who saw us. We returned to the Allies’ house. Dixon kept the bag & then Poole went off to the gig with us. The 2 sailors  wanted to take the bag for Dixon but he wouldn’t let them & when asked what was in it replied “poteen.” So without any further trouble we got our skulls aboard & there we packed them in Dixon’s portmanteau & locked it, no one on the steamer, except our two selves, having any idea that there were 12 human skulls in the steamer & they shan’t know either. 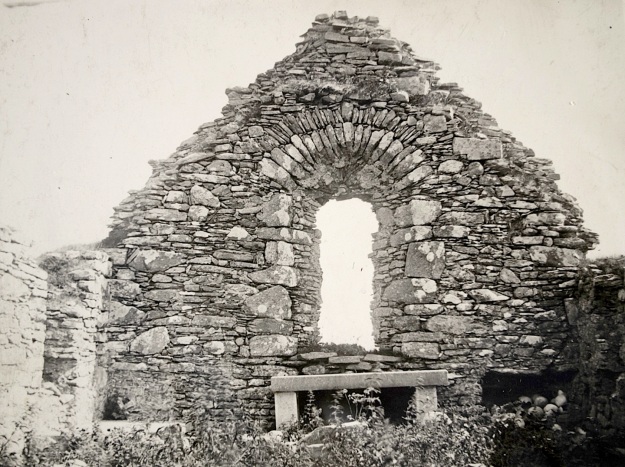 Teampall Chomain by Dixon. The niche where the skulls were kept is visible in the lower right hand corner. The sketc h referred to by Haddon below is an exact illustration of this scene, suggesting that the sketch and the photograph are contemporaneous. This copy of the photograph is from the photograph albums of Charles R. Browne. With permission of the Board of Trinity College Dublin.

Next afternoon we landed  & went to have a look at the place by daylight & then I made this sketch [a drawing illustrating the site of the niche and the skulls]. The whole place is a mass of graves covered with loose stones. There are no inscriptions & there is no carving anywhere. This particular building was the chapel of a monastery which was founded by St. Coleman in about 667. It is referred to by the “Venerable Bide”; but soon passed into oblivion. On the succeeding page I give a sketch of the church from a neighbouring hill, showing Inishlyon in the middle distance and the mountains of Connemara in the far distance, the group of mountains to the right is “The Twelve Pins.”  In the right hand neat corner of the churchyard is St. Colman’s will of which the accompanying is a sketch, the well itself is inside. 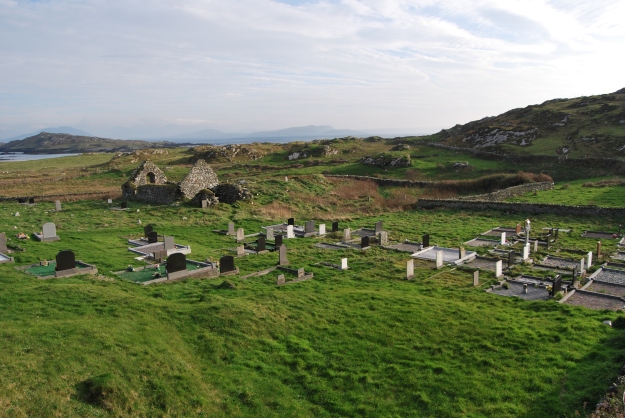 In November 1893 he presented a more formal report on Studies in Irish Craniology II, Inishbofin, Co. Galway to the Royal Irish Academy. 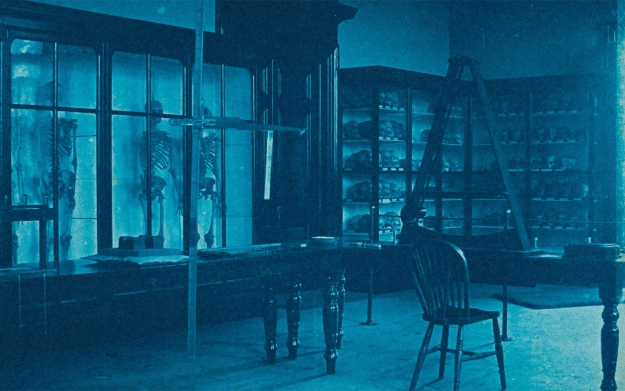 Cyanotype of the Anthropometry Laboratory and Comparative Anatomy Museum in TCD in 1891. With the permission of the Board of Trinity College Dublin.

Haddon had earned the nickname “Haddon the Headhunter” as a boy because of a prank he played on his sisters. The visit to Inishbofin set in train a series of events that converted a boyish fascination with skulls into a scientific orthodoxy that was the signature of an influential player in the establishment of anthropology as a scientific discipline in Britain.

Haddon’s involvement in the Fingal fishing survey coincided with a developing interest in anthropology as a result of his experiences in the Torres Strait. He was particularly interested in folklore as a form of history used by primitive peoples. He regarded the link between folklore and anthropology as similar to the link between palaeontology and archaeology. He had heard of a tradition of proxy weddings on Inishbofin and was eager to learn more. This seemed to matter more than ‘Headhunting’ in July 1890. He had collected skulls in Torres Straits but referred to them as “curios.” Following his escapade with Dixon however he developed a more “scientific” interest in skulls or “crania.”

Dixon had been working in comparative anatomy under Professor Daniel J. Cunningham of TCD. At the time Cunningham was mapping the topography of the human brain and comparing this to the brains of anthropoid apes. Dixon was also a keen photographer. This meeting of interests was to have a major influence on Haddon’s future direction as a scientist. He became obsessed with craniology – the categorisation of skull types through the measurement of particular features  – and developed a theory of racial migration based on tracking the distribution of different skull types.

On his return to Dublin Haddon and Cunningham established an Anthropometry Laboratory in TCD and in 1891 they launched the Ethnographic Survey of Ireland. This was an attempt to use laboratory methods “in the field” in an attempt to trace the origins of the Irish race; this was the origin of the term “fieldwork” which, in this case, consisted of  measuring and photographing the physical characteristics of people in the remotest districts in Ireland, starting in the Aran islands in 1892. 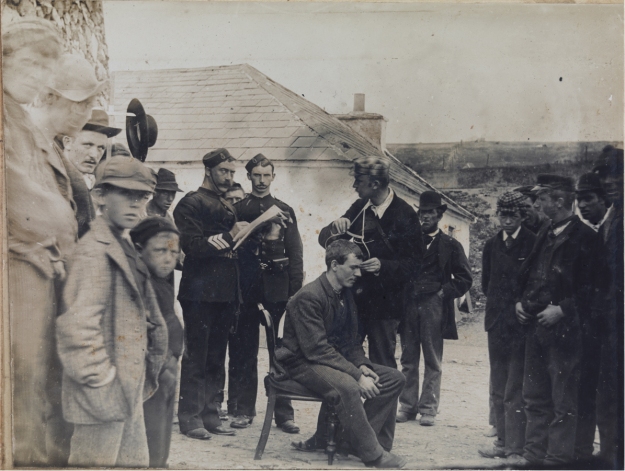 The following year his colleague Charles R. Browne returned to St. Colman’s Abbey but the islanders prevented him form stealing more skulls. Browne, a medical doctor, was more interested in social conditions in the West and, with Cunningham, began to emphasise sociology over physical anthropology and, ethnography over measurement: a split that anticipated a major philosophical divide in the natural and social sciences in the 20th century.

That is a story that has yet to be told.

This blog is based on a presentation made by Ciarán Walsh at the Anthropology and Photography Conference organised by the Royal Anthropological Institute of Great Britain and Ireland in the British Museum in May 2014, in association with Dr Jocelyne Dudding (Cambridge) and Dr Mark Maguire (Maynooth). This research continues as a postgraduate research project with the Anthropology Department of Maynooth University in association with the Irish Research Council. Ciarán Walsh was elected a Fellow of the Royal Anthropological Institute in 2015.

The photographic archive of the  Irish Ethnographic Survey was published by Ciarán Walsh and Dáithí de Mórdha in 2012 in association with TCD, the OPW and the Heritage Council of Ireland. See De Mórdha, Dáithí and Ciarán Walsh, 2012, The Irish Headhunter, The Photograph Albums of Charles R. Browne. Dublin: Stationery Office & http://www.curator.ie.

1 thought on “What happened on Inishbofin in July 1890? Three days that changed the history of Anthropology in Ireland and Britain.” 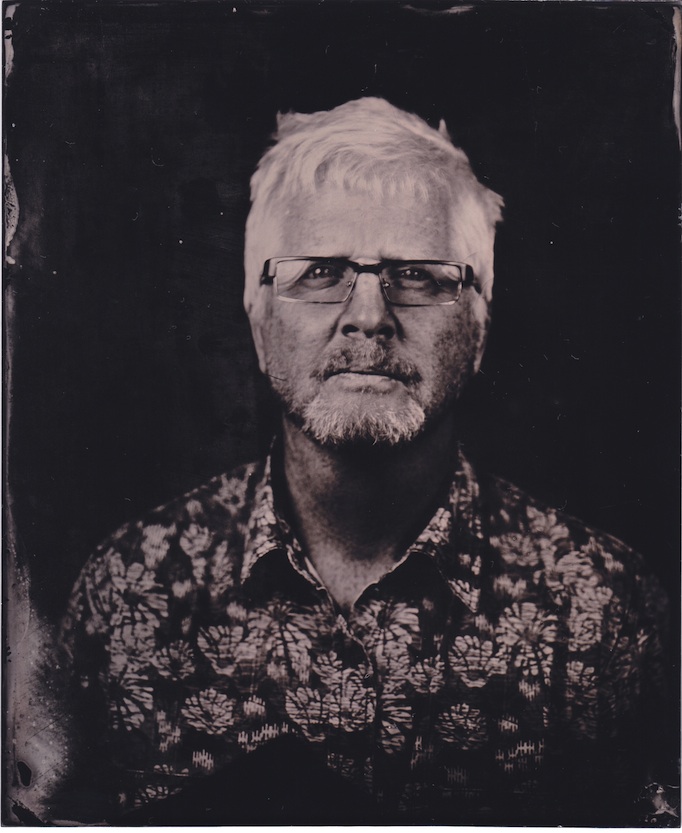