Charles R. and John Browne, 1893, Group of women and Girls Inishbofin, from the Photograph albums of Charles R. Browne, TCD. With permission of the Board of Trinity College Dublin.

THE ORIGINS OF SOCIAL DOCUMENTARY PHOTOGRAPHY IN IRELAND: PART1

Alfred Cort Haddon visited North Connemara in July 1890 and it left  “a distinct impression of sterility, stones & starvation.” He neatly summarised the relentless famine that was endured by the cottier class right up to the end of the 19th century and, in some places, into the early 20th century. This was to become the object of  intense curiosity in the illustrated press: a morbid fascination that has its roots in groundbreaking reports published in the Illustrated News between 1847 and 1850. These reports would, in turn, provide the ‘horrific’ foundation for two of the main tropes of social documentary photography as it developed in the west of Ireland from the 1880s onwards: the wretched hovels of the Irish peasantry and  the “distressful” condition of women. 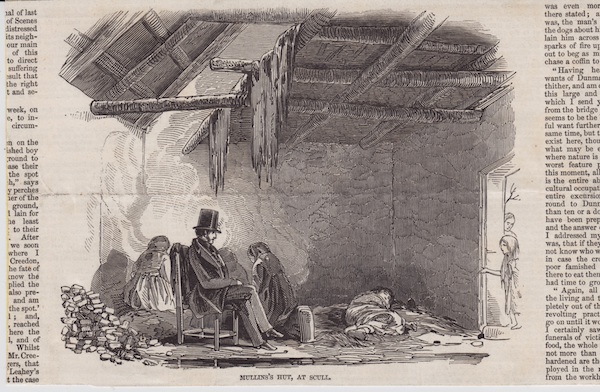 James O’Mahony, Mullins Hut, at Scull, published in THE ILLUSTRATED LONDON NEWS, Feb. 13, 1847. from the collection of Ciarán Walsh.

The Illustrated London News begins its coverage of the famine in West Cork in 1847 with the following declaration:

With the object of ascertaining the accuracy of the frightful statements received from the West, and of placing them in unexaggerated fidelity before our readers, a few days since, we commissioned our Artist, Mr. James Mahoney, of Cork, to visit a seat of extreme suffering, viz., Skibbereen and its vicinity; and we now submit to our readers the graphic results of his journey …

A specimen of the in-door horrors of Scull may be seen in the annexed sketch of the hut of a poor man named Mullins, who lay dying in a corner upon a heap of straw, supplied by the Relief Committee, whilst his three wretched children crouched over a few embers of turf, as if to raise the last remaining spark of life. This poor man, it appears, had buried his wife some five days previously, and was, in all probability, on the eve of joining her, when he was found out by the untiring efforts of the Vicar, who, for a few short days, saved him from that which no kindness could ultimately avert. Our Artist  assures us that the dimensions of the hut do not exceed ten feet square; adding that, to make the sketch, he was compelled to stand up to his ankles in the dirt and filth upon the floor.

In 1849 The Illustrated London News followed up on this report up with a series of seven illustrated articles on the operation of the newly introduced Poor Law in Ireland, concentrating on Kilrush but covering west and north Clare, Connemara and Clifden as well. The report published on 22 December contained an illustration that was to become – probably -the most iconic representation of famine in Ireland, a sketch of Bridget O’Donnell and her children. 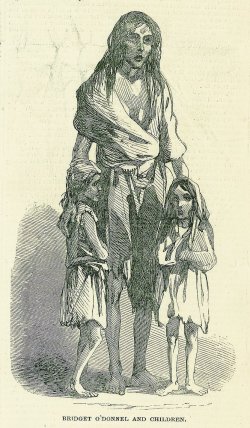 40 years on the pattern repeats itself in the coverage of the “Second Famine” that followed the “crisis” of 1879 and reached a peak in 1898 in Connemara and in the South West of Ireland. There was a difference though, James O’Mahony’s pioneering illustrations were to be replaced by a series of graphic photographs. Was this the beginning of Social documentary photography in Ireland?

Photographs were taken: The origins of social documentary photography in Ireland: Part 2.

To read the Illustrated London News articles online go to: